This is a pretty popular diet trend floating around at the moment. I remember looking into this diet when it began gaining traction as cross fitters began advocating it. I could stop there but I’ll give my 2 cents.

Don’t get me wrong here, the Paleolithic diet has some great points, but most of its logic is pretty flawed. The diets main philosophy is that we should eat like the hunter gatherers ate millions of years before us, as this is how we were genetically made up to eat. We should only consume foods that were available to the Paleolithic human’s millions of years before us. We must put emphasis on fruits, vegetables, nuts, seeds and lean protein sources. Anything that has had a humans hand in producing it is forbidden! This means absolutely no grains, no dairy, and no processed foods whatsoever. None! Sounds sustainable right?

Now you can see why it is easy to agree with some points in the diet. Consume plenty of fruit and veg, eat lean proteins and limit sugar and sodium intake. You will be radiating health and ready to hunt down your first porcupine in no time! But that’s where it ends. Nothing we didn’t already know right? Mama always told us to eat our fruit and veggies didn’t she? Well mine did.

Firstly, absolutely no dairy and grains allowed in the diet? Besides the fact that you are eliminating 2 whole food groups from the diet that provide an abundance of energy and vital vitamins and nutrients for optimal health, it also poses major adherence difficulties and potential deficiencies. Its human nature to crave something more when we know we can’t have it.

Secondly, I see so many paleo advocates pounding down broccoli, kale, spinach, cauliflower, almonds peanuts, grapefruits, tomatoes, melons, and the list goes on, saying that they can get all the nutrients they need from these amazing food sources! That’s awesome not going to dispute that with you, but w 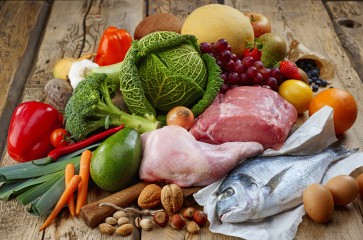 hat if I told you that broccoli, kale, spinach, apples, oranges, cauliflower and in fact almost all vegetables did not even exist in the Paleolithic era as they do today. And the few that did were completely unpalatable. Or how about that naturally found almonds and beans were laced with fatal levels of cyanide? Over the past years almost every food has been modified in one way or another. So you can’t eat these foods if you advocate paleo. They were not available to your primitive friends, well almonds and beans were, but I’m assuming you can guess what happened to that guy right? Besides the fact that he probably wouldn’t even have lived passed the age of 25.

If living in a cave and foraging for food gives you an itch that’s great. Who am I to question that? But I’m happy shopping at Woolworths, eating a variety of foods from all of the food groups, and using gas powered appliances.